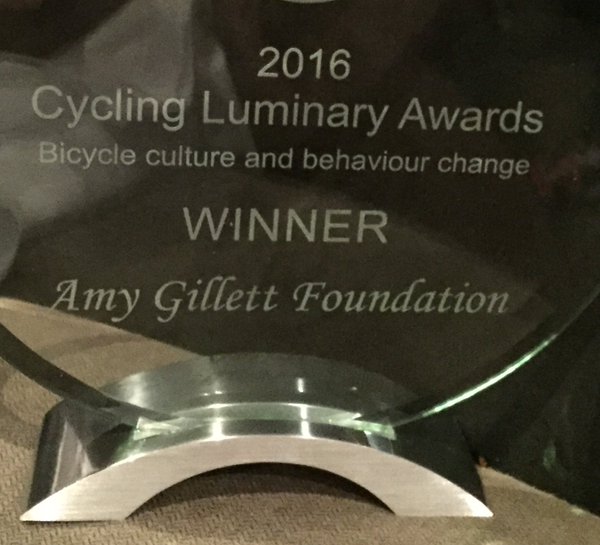 The Amy Gillett Foundation is honoured to have been awarded the 2016 Australian Cycling Luminary Award for bicycling culture and behaviour change.

Presented by the Cycling Promotion Fund since 2003, the awards have become a national platform to celebrate the advancements in getting more people riding across Australia.

The awards were presented at the Australian Bicycle Summit dinner at Parliament House in Canberra, to celebrate the hard work, commitment and dedication of those who are making Australia a better place to ride.

Awarded in three categories, bike leadership, built environment and urban design and bike culture and behaviour change, the Amy Gillett Foundation was recognised for the ongoing ‘a metre matters’ program which has now been implemented in law in South Australia, via trials in Queensland, the ACT and New South Wales and through a variation passed into law in Tasmania.

Accepting the award on behalf of the Amy Gillett Foundation, board director Belinda Clark said it was pleasing recognition for the ongoing efforts to make bike riding safer around Australia.

“Formed ten years ago, this award is a great honour and recognition of the hard work of the Amy Gillett Foundation.”

“Along with my fellow board members, we volunteer our time because safety matters, and through the dedication of our staff, ambassadors and volunteers we continue to work towards our vision of zero bike rider fatalities in Australia.”

“A metre matters because it provides a tangible space around bike riders and we will continue our efforts to have it passed as law in all Australian states and territories.”

The Cycling Promotion Fund is committed to promoting and encouraging cycling and advocating for policies and investments to make cycling accessible, safe and convenient. Established in 2000 by the Australian Bicycle Industry, the Fund was created to enable the industry to promote cycling.