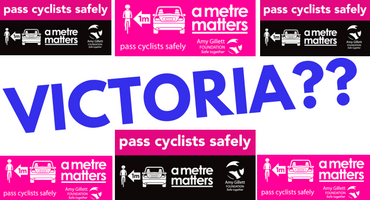 “We again call on the Victorian Government to pass a metre matters legislation. The rest of the Eastern States of Australia now have a metre matters laws permanently or in trial, including Queensland, South Australia, New South Wales, Tasmania and the Australian Capital Territory, but Victorians are still waiting”, said Amy Gillett Foundation CEO, Ms Phoebe Dunn.

“There’s been a comprehensive Inquiry with many positive recommendations published, but the cyclists of Victoria are yet to see any result that will improve their travelling conditions and the 15 March 2017 deadline for response is looming.”

Ms Dunn continued saying “A metre matters will benefit the whole community. It will save lives. Recent research shows that nine out of ten Victorians support this law”.

To add pressure to the Government to pass this legislation, the Foundation recently launched a grass roots social media campaign featuring a cross-section of the vibrant cycling community including diverse age groups, everyday commuters, cycle couriers, recreational cyclists through to current and previous ProTour riders.

Consistent amongst all cyclists involved is that they all want to be able to pedal on Victorian roads under safer legal conditions that a metre matters will provide.

The spectrum of supporting messages include Amy Gillett Foundation Patron, Simon Gillett, retired professional cyclist, Phil Anderson, the first ever Australian to wear the heralded yellow jersey in the Tour De France; World Triathlon Champion Emma Carney, through to Year 7 student Benjamin Wells, who wants safer cycling for his commute to and from school.

“We’re encouraged by the responses received so far with many other supporting messages coming from states outside Victoria where a metre matters legislation is in place and working to reduce the risk cyclists’ encounter daily on their rides.” Ms Dunn added

These social media posts have been tagged with the people responsible for approving a metre matters passing into legislation and include Victorian State Premier Daniel Andrews, Roads and Roads Safety Minister Luke Donnellan and Road Authority, VicRoads.

In addition to asking the Government to pass a metre matters legislation, the Foundation is inviting those interested to support their campaign by liking the clips created so far; sharing these posts, though to recording their own short video clip and posting them on their own social channels with the suggested tags above, including, of course the Amy Gillett Foundation.