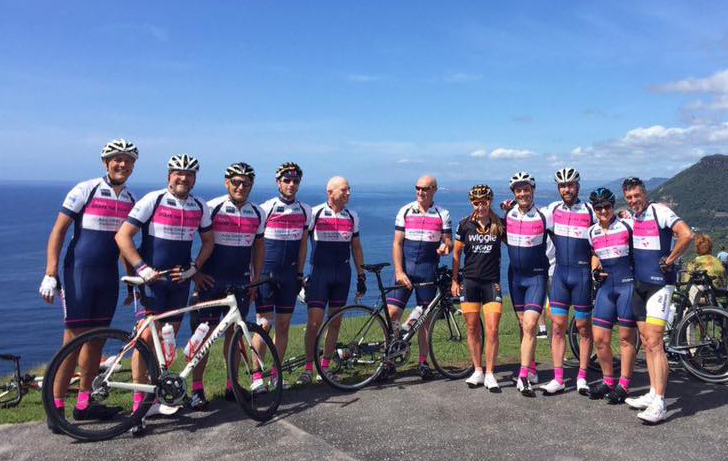 A major fundraiser and a great opportunity to raise awareness, the name of the tour is derived from our philosophy that we all need to share the road to achieve bike rider safety.

Held annually, since the first Share the Road Tour in 2009, over $1.35 million has been raised by event participants. This enables the Amy Gillett Foundation to continue its work in delivering important safety messaging and a safe cycling environment.

AGF board member Rod Katz shares his experience from this year’s tour.

As an old bloke, flattered by the description “mid-fifties”, anticipating the Amy’s Share the Road Tour involves a fair dose of gut-clenching fear.

I’ve known Simon Gillett – the “Directeur Sportif” for about 20 years and know that he has a big set of legs, a heart to match and enjoys suffering – especially when it involves others. He was once the coach of the Australian rowing team and, having dabbled as a rower at school, I know just how sadistic even amateur versions of these bastards can be.

The tales of past tours include baking rides in Queensland, fiendish wind and cold in Tasmania, and long days and substantial climbs in every edition. The participation of cycling legends, Phil Anderson, Stephen Hodge, Bradley McGee and Rochelle Gilmore along with current stars of the sport like Rachel Neylan, Kimberley Wells and Gracie Elvin does not give any great comfort. All of these people could ride my puny legs into the ground without breaking into a sweat…

Then of course there was the proposed route.

Day 1: Cronulla to Fitzroy Falls (137km). That doesn’t seem too bad. I’ve done the ‘Gong’ ride a few times which gets you within 40kms of day’s end. Of course that last 40kms to the falls is up Macquarie Pass.

Day 2 (120km) should be sweet. Back down to the Coast, but of course that is via Kangaroo Valley. A wonderful descent, if you are not terrified of descents, but then the climb up the Berry Pass back down to Berry via the even steeper hairpins and a cruise along the coast to Huskisson.

Day 3 (140km) Huskisson to Braidwood: this is where it gets interesting. The so called Strada Bianchi (aka dirt) makes its first appearance. From the Princes Hwy we head up the first 9km dirt section on Turpentine Rd before connecting with the Braidwood connection via Nerriga. Lots more dirt.

Day 4 (137km) Braidwood to Cooma: Serious banjo music territory here. The only hamlet on the route is Nerriga and I know that its dominant life form is the chickens that live outside the pub. I suspect that these have thrived by picking at the bones of unsuspecting travellers!

Day 6 (indicative 127km – actual km unknown) Tumut to Canberra: about a month pre-tour I’m chatting with Trevor at the bike shop about this leg and he tells me that the proposed route over the Brindabellas is essentially impassable on road bikes. He did it with another very strong cyclist a couple of years ago on cyclocross bikes and it took them 10 hours. His account featured incredibly rocky roads, logging trucks and very steep climbs. He recommended re-routing via Wee Jasper on the basis that the extra 30-40kms would still be quicker.

Why have I agreed to this?

A moment of weakness is all it takes when the event is still six months away, but primarily it was because the AGF provided a little support on one issue and it seemed that the “right” thing to do was payback by agreeing to join the Tour. It’s a long way off. I can ignore it. Worst that can happen is that I’ll get off the bike and ride in the camper with Rach Kininmonth. Rach is wonderful company and has been the chief organiser of the tour logistics since the first ride. Rach rowed with Amy and has the energy of five normal people. Of course this is essential for someone with four kids.

Fortunately, a couple of very good people helped me to train.

Ange Koch did the Queensland tour last year and was able to give me a few hints. Ange has the great advantage of being an Olympian with all the physical and mental strength that that implies. She told me motivating stories from her 2014 tour experience, such as being on the front of the bunch to the point of delirium as the promised lunch stop failed to emerge out of the shimmering Queensland heat (it later came to light that there was a misunderstanding by the support crew).

El Browne, ex granny flat resident, has discovered the joy of cycling over the last year. With her new Cannondale, we took on rides of increasing length and intensity. Starting with a 30km tour we ended up doing a climb of the notorious Fitz’s Hill in Canberra and a host of other classic Canberra rides of 50 -100kms.

Essentially training boiled down to one longish ride a week, daily shopping trips and bike trips (45 minute return) to visit Mum in the nursing home. Walking the dogs and a few hours of tennis a week contributed to general fitness.

A $7500 minimum fundraise should not be too difficult for this great cause but I can understand people are pretty sick of being hit up for money every time they turn around.

As such, I limited my ask mainly to those people I remember supporting over the last year in their various challenge events. I was warmly impressed by the reciprocal donations. Having been strongly resistant to Facebook up to now I’m a bit leery of using it as a fundraising platform. Granted, it is a great platform for mentioning stuff about the ride and why it is important to change the culture out on the streets and roads.

In the end, I would have been happy to underwrite the minimum donation myself, but I’m putting it out there that anyone thinking of Christmas presents should consider a contribution to my fundraising page.

The cause of road safety, and especially safety for bike riding, is very close.  Amy was a wonderful friend to our family. I did this ride on the 10th anniversary of her death and it has a special meaning. Our daughter, Jo, was a flower girl at Amy’s wedding to Simon Gillett. Vida and I enthusiastically took part in the dancing… We miss her still very much.

You can contribute to Rod’s fundraising page by clicking here