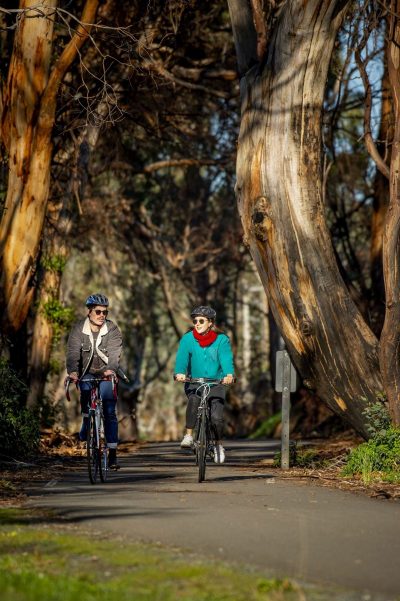 The Amy Gillett Foundation is delighted by the announcement that Stage Four completion of the popular Amy Gillett Bikeway in the Adelaide Hills has been given the green light after $2.6M in funding was announced on Monday 12 October. The announcement was made after six years of dedication from Federal Member for Mayo Rebekha Sharkie and South Australian Senator Stirling Griff and will allow the Bikeway to continue from Mount Torrens to Birdwood.

This new development will ensure generations of South Australian cyclists and visitors to the State will have access to safe, connected off-road cycling infrastructure.

“We are thrilled by this announcement and wonderful leadership from Senator Sharkie, Senator Griff, the Federal Government and the Adelaide Hills Council.”

The Amy Gillett Bikeway is a legacy to the Australian cyclist and is loved by many, including Amy’s parents, Mary and Denis Safe, who still reside in their home town of Adelaide.

“As Amy’s parents, we are very excited that Stage Four of the Amy Gillett Bikeway will go ahead. This safe and completely off-road bikeway is a wonderful legacy of Amy’s life and it provides so much pleasure to those who live in or visit the Adelaide Hills.”

“Thousands use the bikeway, and it is a huge tourism drawcard for Mayo so completing Stage Four will add to the appeal of this shared-use trail.”

Completion of the bikeway is an important step towards recovery in the region and supports the wider strategic vision for cycling in the Hills.

“Council and the community have long advocated for the completion of the Amy Gillett Bikeway with this project providing another important way for our towns and community to reconnect after the Cudlee Creek Bushfire and COVID-19.

We know spending time outdoors and exercising is beneficial and the completion of the Amy Gillett will positively impact on the physical and mental well-being of our local community.”

Safety is key to cycling participation. and recent polling by AGF shows that 89% of Australians support temporary separated bike lanes, making it clear that separated cycling infrastructure is the preference for all road users.

Stage One of the Amy Gillett Bikeway from Oakbank to Woodside was built on an abandoned rail corridor in 2010 by the State Government thanks to the persistent lobbying of the Adelaide Hills Rail Trail group and the local council.

Stage Two to Charleston and Stage 3 to Mount Torrens were then constructed but since 2014 work of the remainder of the planned bikeway stalled when no further monies were allocated.

At AGF, we’re excited to see that South Australia is joining Sydney, Brisbane and Melbourne as a number of recent government investments take shape to ensure more Australians have access to safe cycling.

On the 16th anniversary of Amy Gillett's tragic cycling death,...

We’re calling on everyone who lives in or visits Victorian...