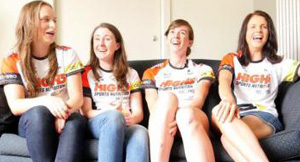 The High5 Dream Team was born at the end of 2014 when former team-mate of Amy Gillett and long-term friend of the Foundation, Rochelle Gilmore identified there are many talented Australian female cyclists in need of professional support, guidance and direction.

Bike rider safety is one of the biggest factors women consider before jumping on a bike, whether that be professionally or recreationally.

As an affiliate of the HIGH5 Dream Team, the Foundation will have eight inspirational female athletes across the country championing its safety messages and raising awareness for safer bike riding for women, men and children.

“We know safety and confidence in their own skills and abilities is important for women wanting to cycle for health, recreation or active transport,” said Amy Gillett Foundation CEO Tracey Gaudry.

“As a charity whose sole focus is on improving bike rider safety we are extremely proud to be involved in the HIGH5 Dream Team and have these wonderful ambassadors spread our safety messages.”

Eight athletes have been selected through Cycling Australia’s State Institute network programs to form the HIGH5 Dream Team after being identified as having potential to represent their nation at Commonwealth, World or Olympic level during the next few years.

The Team will compete in ten televised NRS races throughout Australia during 2015, raising awareness for the Foundation’s leading safety message a metre matters to millions of viewers via the back of the Team’s cycling kit.

Gilmore said she had a burning desire to provide guidance and support to more Australian athletes.

“Running this professional NRS team is like a dream come true, I’ll be working in a very professional environment with a group of seriously talented individuals,” Gilmore said.

“I’m thriving on the challenge of delivering these athletes to European based pro teams, ready and prepared.”

2015 will mark ten years since Amy Gillett’s passing and Gaudry said the Foundation’s association with the HIGH5 Dream Team is a wonderful way to honour Amy’s life and ambitions.

“We are supporting young women who aspire to the same pursuit of sporting excellence the way Amy did, all while raising awareness for safer bike riding for the millions of people who enjoy riding a bike across Australia,” Gaudry said.