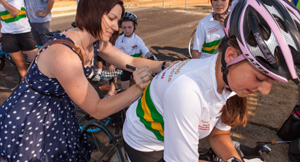 More than 1,300 hit the streets of the nation’s capital as part of
Amy’s Big Canberra Bike Ride

The queues were long as Anna Meares, the world’s most successful track cyclist, signed autographs and had her photo taken with many of the 1,300 people who took part in this year’s Amy’s Big Canberra Bike Ride.

Meares, in her first public appearance since winning her 11th world title in Paris, was the main attraction on the 20km route and full of praise for Canberra.

“I was passed by a lot of kids and families and then I passed them back again,” said Meares.

“It was a lot of fun and so great to be out there with so many people just enjoying the activity of cycling. I’ve never ridden around Canberra before. It’s a really beautiful city.”

July 2015 will mark ten years since Amy Gillett was killed by an out-of-control driver during an Australian team training ride in Germany. The Amy Gillett Foundation was formed to reduce the incidence of cycling deaths and injuries, and Amy’s parents, Mary and Denis Safe, were among the riders remembering Amy and joining in the fun.

“We all want our children to be safe on the roads and this is the young generation who will be the adults of tomorrow so they’re learning all the right things with their parents leading by example.”

“The AGF’s efforts in the ACT and across Australia are to improve conditions for bike riders and instilling a culture of mutual respect between people sharing our roads to ensure the next generation can cycle in safety,” Gaudry said.

“The ACT Government’s commitment to legislating a minimum overtaking distance of one metre when drivers pass bike riders will help make this a reality.”

“The ACT Government is doing some really great things and more and more people are cycling every day,” said Armstrong.

“I was absolutely blown away by the number of kids who were part of this and the spirit with which people approached the ride today.”