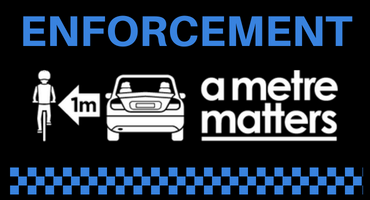 We commend Queensland Police statements that they will take a more active role in enforcement of a metre matters. This follows recent announcements that the ACT Police would also be increasing their focus on enforcing safe passing distances of cyclists by drivers.

In addition, together with Bicycle NSW,  the Foundation continues to engage in positive discussions with NSW Police and the Centre for Road Safety about a metre matters enforcement campaign along similar lines to that adopted by the West Midlands Police in the U.K. Also assisting to raise the importance of enforcement is Dulwich Hill Cycling Club with their petition and media activities.

Whenever new laws are introduced, education and enforcement of those new laws are very important steps in changing driver behaviours on our roads.

This change in behaviours will mean safer cycling for all.

This is the ultimate goal.

Kudos to all involved.