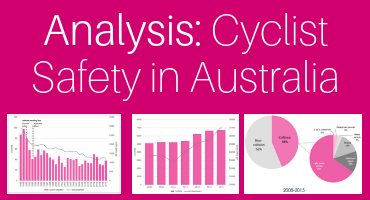 Cycling is the only mode of transport not showing an improving trend in the number of fatalities and injuries, according to an analysis of statistics from the Bureau of Infrastructure, Transport and Regional Economics (BITRE).

The analysis of BITRE Australian Road Deaths Annual Summaries undertaken by the Amy Gillett Foundation, Australia’s leading authority on cycling safety, showed “High Threat to Life” injuries incurred by cyclists increased by 70% between 2008 and 2015, and numbers of cyclists counted in hospital injury statistics were 32% higher during the same period.

“The results of this analysis are a wake-up call for every policy-maker in Australia, and particularly in Victoria where the government has refused to implement minimum passing distance legislation,” said Foundation CEO Phoebe Dunn.

“Policy levers are obviously having an impact on making roads safer for other modes of transport, but a positive impact for cyclists is lagging seriously.”

Ms Dunn said minimum passing distance law was only one of a suite of measures needed to deliver safer outcomes for cyclists.

“Already this year we know of 31 cyclists who have been killed in a crash with a motor vehicle. We need to legislate for better technology in vehicles that provides greater protections for vulnerable road users. The technology is out there already, but until there is a legislative imperative for change, motor vehicle manufacturers will make these measures expensive extras rather than standard equipment.”

The analysis found that from 2008 to 2015, “High Threat to Life Injuries” decreased 6% for car occupants and 6% for pedestrians, while increases were recorded for motorcyclists (13%), and cyclists with a staggering 70% increase.

Ms Dunn said there was evidence of a positive impact on cycling safety from legislating minimum passing distances, but cyclists needed more.

“We need to invest in exposure data (details of people’s cycling behaviour), which is not collected routinely nationally, to understand what is behind trends in cycling trauma, and where taxpayer dollars can be best spent to improve safety outcomes for cyclists.”