CYCLISTS TO BENEFIT FROM IMPORTANT AMENDMENTS TO TAC COVER 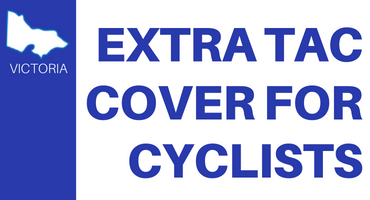 The Amy Gillett Foundation is delighted with the news that the Victorian Government has moved to close a loophole in the current application of the Transport Accident Commission (TAC) compensation scheme in Victoria, so that cyclists will now be covered for injuries sustained if they hit a stationary vehicle regardless of whether they are travelling to and from work.

Dubbed ‘Rory’s law’, this legislation is in response to Richard (Rory) Wilson’s case, who was found not eligible to receive compensation for significant injuries suffered when hitting a parked truck while out cycling with friends. We are pleased that calls to close this loophole have been heeded.

Importantly, the legislation, once passed, will be retrospective to 9 July 2014 – the date Rory sustained his injuries. The extended cover will apply regardless of whether the cyclist is travelling to or from their place of employment.

These changes will mean that cyclists will be covered if they are injured in an incident on the road with another vehicle, including a stationary or parked vehicle, regardless of whether they are cycling for recreation, training, fitness or commuting to and from work.

This is great news for cyclists, legitimate road users, who are set to have an expanded level of cover when using roads in Victoria.

The Amy Gillett Foundation will consider the Bill in detail and work with the TAC and other cycling bodies to ensure that information about the changes are widely disseminated, once passed.

Article by AGF Media
Previous Story
TWO ABREAST IS SAFER, AND THE LAW
Next Story
SAFE TOGETHER – OUR WINTER eNEWS