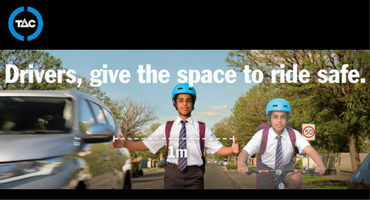 Today the Victorian government, via the Transport Accident Commission (TAC), launched its promised education campaign – “Drivers, give the space to ride safe”

Having worked closely with TAC during the development of this advertising campaign, the Amy Gillett Foundation welcomes this contribution to changing behaviours on our roads for all cyclists. Attending the launch, Amy Gillett Foundation CEO Phoebe Dunn said “This campaign highlights the vital importance of leaving at least a metre when passing cyclists and while our ‘a metre matters’ campaign goes one step further and legislates minimum passing distances, we hope this campaign is successful in changing behaviours on our roads for all cyclists.”

“We will continue to push for this legislation to be introduced in Victoria, like it has in QLD, SA, TAS, NSW, ACT and later this month WA. Victoria is the only State not to commit to a trial of a metre matters ” Dunn continued.

The launch featured on all major news services including Ten here.

Find out more about the TAC campaign here.