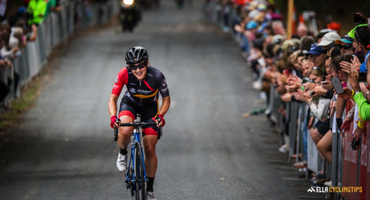 We are delighted to announce that with the assistance of Cycling Australia, and long-time Amy Gillett Foundation supporter and owner of the top ranked Wiggle High5 Pro Cycling Team, Rochelle Gilmore, a place has been made available in her team for our 2018 Amy Gillett Cycling Scholar.

This is an amazing opportunity and Amy Gillett Foundation is thrilled to continue our Cycling Scholarship. It will provide Brown with the opportunity to live, train and compete in Europe and the United States, racing for the 2018 Wiggle High5 Pro Cycling Team.

“On behalf of the Board and management team we congratulate Grace on being awarded the 2018 Amy Gillett Cycling Scholarship. We look forward to seeing her continue to excel with this new cycling opportunity and working with her to achieve a safe cycling environment in Australia,” said Amy Gillett Foundation CEO Phoebe Dunn.

“This scholarship is a legacy to Amy’s life and ambitions, and Grace has shown similar dedication and determination in her sport.” Gillett said.

“Like all Amy Gillett Foundation Cycling Scholars, Grace has the potential to become a pro-athlete, and we are keen to see the passion she will bring to her role as a Foundation Ambassador,” Gillett continued.

Brown was overjoyed when she received the news.

“I’m thrilled to be this year’s Amy Gillett Cycling Scholar, I’m very focused on my cycling and to be the best I can be. This is a wonderful privilege, and I’m in awe of the opportunities this will present,” Brown said.

Like the Foundation, Brown is a firm believer that legislation, education, enforcement and infrastructure are critical to making the roads a safer space for cyclists, as well as the attitudes of both drivers and cyclists in promoting safe cycling.

“Driver distraction remains a particularly complex problem that must be overcome. I want cyclists’ lives to be valued by everyone as equal to anybody else’s. The Amy Gillett Foundation is doing wonderful work in all these spaces and I look forward to working with them more closely,” explained Brown.

Like many cyclists in Australia, Brown has followed the work of the Amy Gillett Foundation, particularly with the recent success of the Foundation’s minimum passing distance campaign a metre matters in QLD, SA, ACT, Tasmania, NSW and most recently in WA.

“I will do my utmost to honour Amy’s legacy and to work closely with the Amy Gillett Foundation to continue its tireless work towards making cycling safe for everyone,” Brown said.

The 2018 Amy Gillett Cycling Scholar is now selected to be a member of the Wiggle High5 Pro Cycling Team, replacing the application process of prior years.