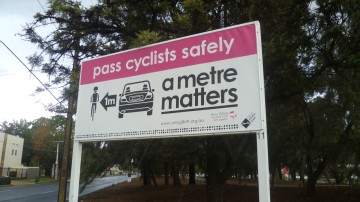 The Minister for Infrastructure, David O’Byrne, made the commitment with World Junior Cycling Champion, Lauren Perry and signed the ‘a metre matters’ petition with members of the Amy Gillett Foundation.

“With more Tasmanians cycling as a healthy alternative transport option, we need to ensure our road environment is safe for all road users.

“Improving protection for vulnerable road users and creating a better shared understanding of what is the right behaviour to use on the road is a priority for Labor,” Mr O’Byrne said.

“A Labor government will conduct a trial mandating a minimum passing distance of one metre by drivers when overtaking bike riders, similar to the trial that is planned in Queensland.”

“Despite significantly less Tasmanians needlessly losing their lives on our roads ever year, there is still more work to do.

“This Committee will be another critical part of our approach to road safety in Tasmania.

“The Committee will provide advice on prioritisation of a suite of initiatives to address issues around cycling safety, including education, infrastructure and communication of road rules.

“The Committee will not only include cycling organisations like Tasmanian Bicycle Council, Cycling Tasmania and the Amy Gillett Foundation, but also include motor vehicle user groups and Tasmania Police.

“As a priority we will also develop a Tasmania specific education and awareness campaign with the Amy Gillett Foundation.”

Tracey Gaudry, CEO of the Amy Gillett Foundation said it is a significant step forward to have Tasmanian Labor’s backing for minimum overtaking distance legislation.

“Bike riders hit from behind by a motor vehicle are one of the leading causes of bike related fatalities in Australia. Clarity of minimum distance requirements to overtake bike riders safely has multiple benefits for bike riders and drivers alike,” said Ms Gaudry.

Collin Burns, Executive Officer Cycling Tasmania said they are pleased that the State Government is recognizing bike riders as legitimate road users and are committed to providing them with the minimum protective space required of one metre.

“This legislation accompanied by education, awareness and enforcement will ultimately save the lives of our most vulnerable road users,” he said.