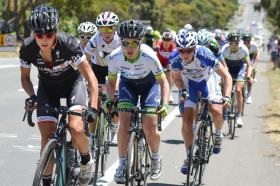 Simon Gillett, Patron of the AGF said “we are delighted to offer the 2014 Scholarship to Lizzie after reviewing the biggest ever field of quality applicants. We hope that the experience Lizzie gains will help her to fulfil her cycling dreams.”

In honour of Amy Gillett, the Scholarship lauds sporting talent as well as broader developments such as schooling, career aspirations and community participation. The Scholarship offers a unique opportunity to assist Australia’s talented up-and-coming women road cyclists by providing competition and training opportunities on both the national and international stage.

Williams, the 30 year-old Victorian, now becomes an official Ambassador for the AGF. You can read more about the Amy Gillett Cycling Scholarship here.

In 2014, an exceptional calibre of applicants, the largest (16) in the Scholarship’s history, were received; testimony to the strength of Cycling Australia’s National Road Series program and in turn the backing of SAS/SIS, NRS teams and the women’s cycling system.

Williams is a determined athlete who has sound racing experience and a strong working ethos. Much of William’s racing has been self-coached and serves as a testament to her dedication and drive to achieve success.

Tracey Gaudry, CEO of the AGF, is delighted by the choice of this year’s recipient and believes Williams is ready to take the step straight into international senior competition.

“The Amy Gillett Cycling Scholarship provides an amazing stepping stone for a developing athlete. The possibility of competing amongst the World’s best in the first ever La Course by Le Tour de France is a career dream,” enthused Gaudry.

Williams was extremely excited when told she was the successful applicant, stating “receiving the Amy Gillett Scholarship has been the icing on the cake to an already ‘dream run’ comeback into this wonderful sport.”

“The simple fact is, I love riding my bike. Being an ambassador for the Amy Gillett Foundation, I now have an international platform to spread their good work.”

Williams started her racing on the track as a junior before moving her focus to the road at 17 and receiving a scholarship with the Victorian Institute of Sport after winning the 2003 Australian Criterium Championship. After completing her studies as a secondary school teacher, Williams returned to racing with the support of the Specialized Securitor women’s cycling team and most recently as an invitational rider with the California based team Vanderkitten.

This year the Amy Gillett Road Cycling Scholarship recipient will take part in many of the best Elite Women’s races on the world calendar, the first being the Thuringen Rundfahrt in Germany (home of Amy’s memorial) followed by the inaugural La Course by Le Tour de France in Paris, France.

“Whilst Saxo is renowned for its involvement in men’s elite cycling it is very exciting for our company to get more involved locally and assist in supporting Lizzie Williams as the 2014 Amy Gillett Cycling Scholarship winner. Australian women’s cycling is growing and succeeding on the world stage and I know that Lizzie will not let this opportunity go by without giving it her absolute best efforts, “

Cycling Tips have written up a great feature on the Amy Gillett Cycling Scholarship, as well as an interview with Lizzie Williams, which you can read here.