One step closer to ‘a metre matters’ in Victoria 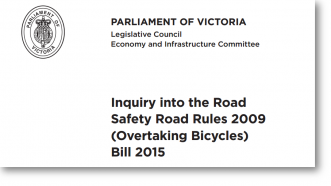 The Amy Gillett Foundation welcomes the report of the Parliamentary Inquiry into minimum overtaking distance laws in Victoria, which recommends that the Victorian Government adopt a metre matters laws.

The Economy and Infrastructure Standing Committee unanimously supported adoption of such laws in Victorian in its report tabled in the Victorian Parliament today, following its Inquiry into the Road Safety Rules 2009 (Overtaking Bicycles) Bill 2015.  The Committee also made some important recommendations in relation to education and enforcement of the laws.

“This is a welcome development in Victoria, and we urge the Victorian Government to take heed of these recommendations and implement a metre matters laws in Victoria without further delay”, said Phoebe Dunn, CEO of the Amy Gillett Foundation.

“The majority of Australian States and Territories have a metre matters laws or their equivalent in place.  Victorian cyclists have long been calling for these laws, and there is now nowhere for the Victorian Government to hide”, she added.

A metre matters laws require motorists to give cyclists a minimum of one metre when overtaking on roads with speed limits of up to and including 60kmh, and a minimum of 1.5 metres for anything above that speed.

“The report provides the basis for the Victorian Government to take positive action in the interests of cycling safety,” Mr Textor said.

“The Foundation has spearheaded the national effort on a metre matters laws because it will help save lives. A metre matters because it provides a practical measurement for drivers when overtaking bike riders. As Australia’s leading bike rider safety organisation, our mission is to achieve zero bike fatalities in Australia and adoption of these laws Australia-wide will make a difference in achieving that goal.”

“Last weekend over 5,500 cyclists showed their support for a metre matters laws at the Amy Gillett Foundation’s Wiggle Amy’s Gran Fondo in Lorne. Let’s give those cyclists something to celebrate”, he added.

Queensland and South Australia have permanent a metre matters laws in place, with two year trials underway in the ACT and NSW, and a version of the laws operating in Tasmania.  There is momentum for change across the country with a Federal Senate Committee recently recommending that the Model Road Rules mandate minimum overtaking distance laws, and now the Victorian Parliamentary Committee joining the call to action for a safer bike riding environment in Victoria.

“Amending the road rules to mandate a minimum overtaking distance will help reduce crashes between vehicles and bike riders by changing behaviour. We know from the experience in Queensland that the ‘one-metre rule’ is working,” Mr Textor said.

“We look forward to working with the Victorian Government on the implementation of these laws in Victoria, including a comprehensive education and awareness campaign,” Phoebe Dunn said.