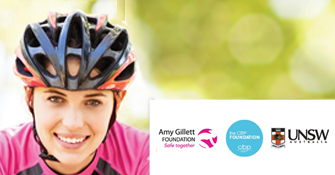 The Amy Gillett Foundation has joined forces with the University of New South Wales Law faculty and Colin Biggers & Paisley to conduct the research into all laws impacting on bike safety in Australia.

The bicycle safety organisation has formed a unique partnership with University of NSW and a major law firm to investigate how legal frameworks affect bike safety.

Amy Gillett Foundation CEO Belinda Clark said the research into legal frameworks that affect bike safety, will touch on the Australian Road Rules and state based criminal and civil laws, such as assault, negligence, and dangerous driving.

“It is timely that ten years after Amy Gillett died after being hit by a car while cycling in Germany, we look for long term improvements to bike safety,” Ms Clark said.

“This partnership with UNSW Law and Colin Biggers and Paisley will allow us to identify legislative changes that will make bike riding safer,” Ms Clark continued.

“This is our first bike project and what a worthy one it is. Bike safety is something that affects everyone,” Mr Crennan said.

“Our first intern Simon Elder is a great example of what the students can bring to the project with a joint engineering and law background as well as a passion for road safety,” Professor Steel said.

Amy Gillett died on 18 July 2005 when she was hit by a car while cycling in Germany with the Australian national team.

“We have reached so many people with the message about sharing the road but there is still
more to do,” Ms Clark said.

This month the Foundation is celebrating Amy’s legacy with the We Remember Amy Campaign. This includes the release of a series of videos, a social media campaign and professional cycling teams honouring Amy in Germany on 18 July. The first video features Amy’s family, while the second video talks about Amy’s legacy to the community.