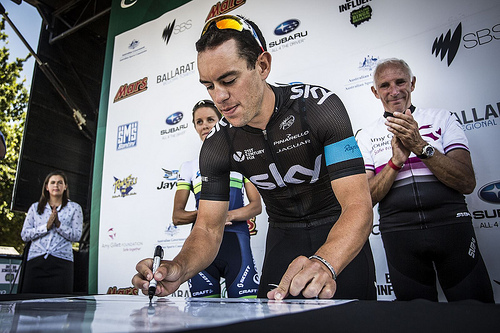 Led by Richie Porte, Australia’s elite road cyclists this weekend have thrown their support behind the petition to the Australian Government calling for the road rules to be made safer for the millions of Australians who bike ride regularly.

The petition is asking for changes to the model Australian Road Rules to mandate a minimum overtaking distance of one metre when drivers pass bike riders on the road.

Richie Porte was first to sign the petition, followed by the cream of Australia’s women road cyclists as they assembled for the Cycling Australia Elite Women’s Road National Championships in honour of Amy Gillett, a former Australian representative cyclist who was killed while training when hit by an out of control driver in 2005. The Elite Men will sign the petition before the Men’s Road Race on Sunday.

Sponsored by Cycling Tasmania as the Tasmanian community mourns the death 21 year old Lewis Hendey after being hit while riding by a driver from behind on 28 December, the petition will be presented by Andrew Nikolic MP to the House of Representatives when Federal parliament sits in May.

Tasmania born Porte explained “The current laws in Australia offer inadequate protection to bicycle riders on the road, this has to change. We all know that space matters – a metre matters – when passing bike riders. This campaign is understood nationally, it’s time to make it law.

“I’m prepared to put my name to this, on behalf of the millions of Aussies who deserve to ride their bikes in a safer environment, whether for work, sport or play. This is an action that everyone can take. Signing the petition is your way of leading the charge for a safer cycling environment.” said Mr Porte.

Simon Gillett, Patron of the Amy Gillett Foundation, said the Cycling Australia Road National Championship was a poignant place to launch the petition.

“Amy was training with her Australian teammates when her life was taken from her. Many of the riders here this weekend either knew Amy, rode with her or have had their own careers in some way shaped by her legacy,” said Mr Gillett.

“As a young female rider finding my feet in the sport, I want to know that more is being done to protect all bike riders. We are champions for ‘a metre matters’ for all the families who have lost loved ones, to change the way people share the road to make it safer for everyone.” implored Ms Mundy

Adrian Anderson, CEO of Cycling Australia applauded the initiative of Collin Burns of Cycling Tasmania (a state affiliate of Cycling Australia) stating “For the elite cyclists here this weekend, the road is their workplace. Cycling is much more than an elite sport, it’s about the millions of Australians who cycle for fun, fitness or as a way of getting about. It’s a way of life.

“Lack of safety is the number one barrier that makes people think twice about riding their bike. Minimum overtaking distance legislation will provide the safety buffer people need when riding their bike on the road,” said Mr Anderson.

Tracey Gaudry, CEO of the Amy Gillett Foundation said although Queensland was implementing a trial of minimum overtaking distance legislation, a national approach was long overdue.

“In 2013, 48 bicycle riders lost their lives while doing something they loved – riding their bikes. The time to act is now, waiting will only result in the tragic loss of more lives. The lives lost on our roads are the price we are paying for the delay in legislation that is already enacted in countries around the world,” said Ms Gaudry.

The petition will be open until 30 April 2014 and can be found at on the Amy Gillett Foundation website and the Cycling Tasmania website.

For those visiting the Australian Road Championships in Ballarat this weekend, the petition will be available to sign at the Amy Gillett Foundation marquee.