Two wheels only this weekend on the Great Ocean Road 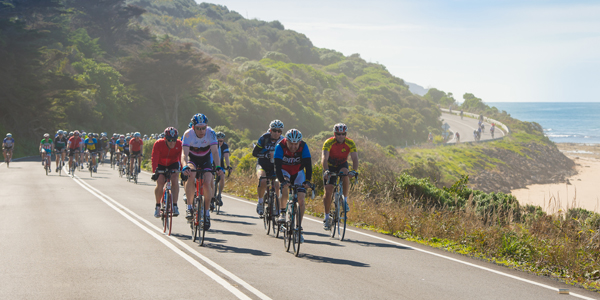 The Great Ocean Road is one of the Australia’s great drives, but this weekend it will become one of the nation’s great rides.

Wiggle Amy’s Gran Fondo – this Sunday 13 September – will hand over the iconic Great Ocean Road to a record field of more than 5,700 cyclists for one weekend only, in the fifth edition of this unique cycling experience, supporting safer cycling and the Amy Gillett Foundation.

A once a year opportunity to ride a fully closed Great Ocean Road, this year’s event has continued to build on its 2014 sell out and, as a result, has increased capacity in 2015.

It is a record number of registrations that would not be possible without the support of the State Government and its funding contribution through the Significant Sporting Events Program.

“The Victorian Government is proud to be supporting such a worthy cause. All Victorians should have a better understanding of bike safety, and Wiggle Amy’s Grand Fondo is playing a key role,” said Minister Eren.

“The Great Ocean Road circuit is one of the best cycling routes in the world, so what better way to get fit, make friends, see the wonderful sights and do your bit for a worthy cause.”

Wiggle Amy’s Gran Fondo is a proven economic stimulus to the Colac Otway and Surf Coast region, and also attracts a large number of participants from interstate and overseas. More than thirty percent of entries are from outside Victoria.

“The event attracts some 5,700 participants and does much to highlight the Great Ocean Road and associated townships as a visitor destination. These participants fill our accommodation providers, cafes and retail shops over the weekend.”

“The Amy Gillett Foundation is Australia’s leading bike rider safety organisation, and we are thankful to have the support of State Government of Victoria and the Surf Coast Shire Council for the fifth edition of this great event,” said Clark.

“Wiggle Amy’s Gran Fondo is pivotal to the work of the Amy Gillett Foundation, and provides a significant platform through which the Foundation can raise awareness and act as a catalyst for change.”

This weekend’s event will include:

Born out of tragedy, the Amy Gillett Foundation was formed with a single purpose – to make bike riding safer. The Foundation is Australia’s leading bike safety organisation and aims to achieve zero bike fatalities in Australia. It recently launched the ‘We Remember’ initiative to commemorate the 10th anniversary of Amy Gillett’s death.

All proceeds and fundraising associated with Wiggle Amy’s Gran Fondo will be directed towards cycling safety research, advocacy and educational campaigns and programs.