Victorian Government says not yet to important cycling safety laws 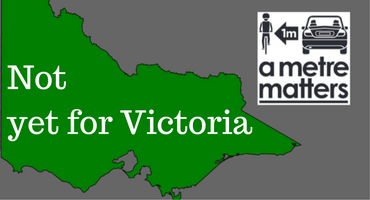 The Victorian Andrews Government today announced that it would not introduce minimum passing distance (a metre matters) legislation in Victoria.

Victoria now stands out as the only Australian State without a metre matters laws in place permanently, in trial, or pledged.

This is despite overwhelming community support for a metre matters legislation, evidence of its success from other Australian states with this legislation and the recent cross-bench Victorian parliamentary inquiry recommending minimum passing distance legislation be introduced in Victoria.

“Today’s announcement by the Andrews Government not to legislate a metre matters in Victoria is extremely disappointing, and goes against the clear recommendations of the Victorian Parliamentary Inquiry,” said Amy Gillett Foundation CEO, Phoebe Dunn.

Instead the Andrews Government has indicated it will undertake an education campaign and evaluate its effectiveness after one year, a step that was welcomed by the Amy Gillett Foundation.

“While disappointed in the decision not to legislate, we are committed to working closely with Government and relevant agencies to implement the education campaign and make it as effective as it can be in the absence of legislation.  We will work tirelessly to ensure this campaign is both appropriately resourced and independently evaluated in the interests of cycling safety,” Ms Dunn said.

Governments around Australia and the world are embracing minimum passing distance legislation, including those in America, Canada, South Africa, Ireland, the UK, France, Belgium, Portugal, Italy and Romania.

The Amy Gillett Foundation, through its award winning campaigns, education programs and events has won enormous community, corporate and government support for measures that will help create a safer environment for cyclists and safer roads for everyone.

“Our annual Wiggle Amy’s Gran Fondo event on the Great Ocean Road each September draws together many thousands of people from Victoria, interstate and overseas to celebrate cycling and demonstrate support for cycling and road safety.

The Amy Gillett Foundation will continue to pursue measures that will help create a safer environment for cyclists and safer roads for everyone, including pushing for a metre matters to become law in Victoria in the future,” Ms Dunn added.